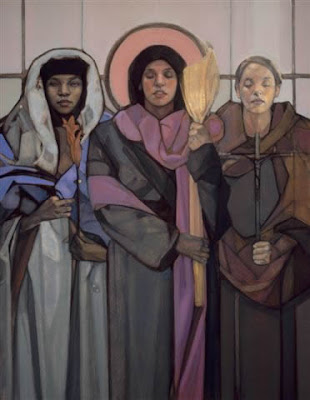 COMPANIONS: Mary Magdalene with Joanna and Susanna
Luke 8:1-3
Afterward He journeyed from one town and village to another, preaching and proclaiming the good news of the kingdom of God. Accompanying Him were the Twelve and some women who had been cured of evil spirits and infirmities, Mary, called Magdalene, from whom seven demons had gone out, Joanna, the wife of Herod's steward Chuza, Susanna, and many others who provided for them out of their resources.
************************************************
The women who followed Jesus.
For these women to follow You was radical. They were from different sections of society. They were women who were not intimidated. They had encountered You my Lord. They had experienced You unconditional love for them. You touched them and their lives and they were not the same again. They were unafraid of the petty gossip and criticism of being part of Your circle providing for You and Your followers. Working, cleaning and using their own means to do it. They were generous and willing to serve. I want to follow You and I want to be just like them.
Posted by Myra DSouza at 9:22 AM