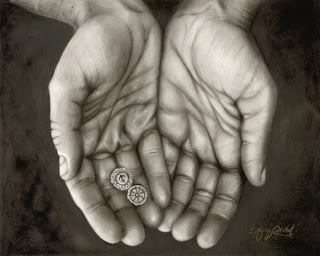 Jesus looked up and saw rich people putting their gifts into the treasury; he also saw a poor widow put in two small copper coins. He said, ‘Truly I tell you, this poor widow has put in more than all of them; for all of them have contributed out of their abundance, but she out of her poverty has put in all she had to live on.’

My Beloved, to do the right thing no matter what the cost is never easy.  Daniel was prepared to risk his life rather than defile himself with the food and wine from the king's table.

The widow's act of putting all she had is quite incomprehensible to the worldly wise and yet we see how pleased God is with both of these characters one in the Old Testament and the other in the New.