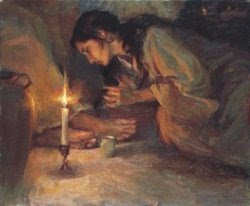 2 Kings 4:27
When she came to the man of God at the mountain, she caught hold of his feet. Gehazi approached to push her away. But the man of God said, ‘Let her alone, for she is in bitter distress; the Lord has hidden it from me and has not told me.’
2 Kings 4:30
Then the mother of the child said, ‘As the Lord lives, and as you yourself live, I will not leave without you.’ So he rose up and followed her.
2 Kings 4:38 - 41
When Elisha returned to Gilgal, there was a famine in the land. As the company of prophets was sitting before him, he said to his servant, ‘Put the large pot on, and make some stew for the company of prophets.’One of them went out into the field to gather herbs; he found a wild vine and gathered from it a lapful of wild gourds, and came and cut them up into the pot of stew, not knowing what they were. They served some for the men to eat. But while they were eating the stew, they cried out, ‘O man of God, there is death in the pot!’ They could not eat it. He said, ‘Then bring some flour.’ He threw it into the pot, and said, ‘Serve the people and let them eat.’ And there was nothing harmful in the pot.
$$$$$$$$$$$$$$$$$$$$$$$$$
My Beloved, everything in these verses speaks of You and our relationship with You. When I come to You I must cling to Your feet and not leave until You answer me. I must be persistent in prayer and tireless in my pleading.
Verses 38-31 is the deadly image of sin that can kill but You O Bread of Life have the power to take away its deadly poison with Your tender mercy, compassion and forgiveness.
Posted by Myra DSouza at 10:35 AM