My Beloved, throughout the Old Testament and woven through the psalms we have this almost now you see it now you don't kind of impression of God's plans to save man. There are hints, promises, covenants, oaths sworn by God about all the wonderful things He is about to do. Patriarchs, prophets, kings bore a faint foreshadow of the One whose coming was imminent. The whole Old Testament is a sigh of longing for the One whom God would send.

When the time had finally come, the Eternal Word who had reposed in the bosom of the Father could no longer be contained and there was this awesome explosion of such glorious magnitude when that plan was revealed to a young virgin. The Son of God left the bosom of God the Father and stooped low in obedience and humility to enter the womb of Mary who was chosen to be Your Mother. Through the Presence and Overshadowing of the Father and the Holy Spirit and this overwhelming explosion of love we move to sublime and sacred silence for God is both glorious and majestic as well as humble and meek.

God created man because although each of the Persons in the Trinity needs nothing that can add or take away from the perfection of the love One for the Other, the Father wanted to draw us into the perfection of diving live. He knew we would stray but He also knew that Your love would have the power to save. Were it not for You my Beloved, God would have remained invisible and unknown to us and we would have no way of truly knowing and experiencing His love for us.

Fulfilling all that the Father desired to accomplish through You He received You back to Himself where You now receive the love, adoration and worship of all men who have accepted You as their Lord, Savior and Redeemer.

My Beloved, exalted in glory and majesty in the highest heavens where the Angels and Saints adore You for Your saving work of redemption, man too rejoices and exults in so glorious a Savior who lay down His life for His sheep.

To You has been given a Name above every other.  To You has been given the authority to judge all men and to the faithful who have completed their journey on earth is given the joy of seeing You face to face.  Exalted by the Father above all, we will sing praises to You Beloved all our days on earth and when they come to a close we will praise and adore You eternally in heaven,

My Beloved, the mantle of faith is handed down from generation to generation to the next. As the faithful who have completed their journey on earth and return to God to receive their reward those who follow in their footsteps must continue the mission to spread the Good News.

After John the Baptist was arrested You began Your public ministry of bringing about the Kingdom of God in the world.  You announced that it was time to put aside the old ways of thinking and to begin believing in the One whom God had sent. 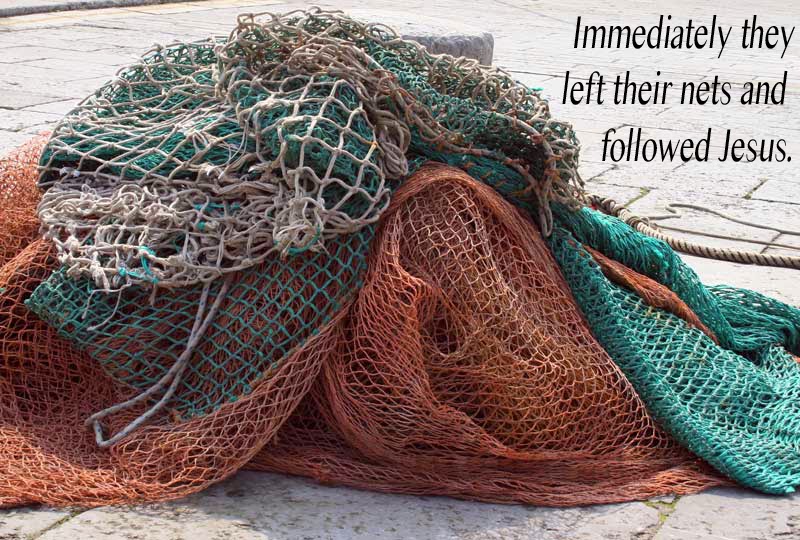 Peter, Andrew, James and John were men who had a livelihood to earn and responsibilities to family members. They could have been so focused on these things that they would have missed the divine call or dismissed it as not meant for them. But there was something so compelling about the invitation and the One who called that they left everything and followed You.

In the midst of the mundane, everyday routine of our lives we must be attentive to Your voice and heed Your call to make You known to those around us. We are each called to do our part in building up the Kingdom of God. To those who belong to God's family is granted the privilege of knowing the Son and making Him known. God has no need for hired help when He has us, His adopted children, to work in His vineyard.
Posted by Myra DSouza at 3:16 PM